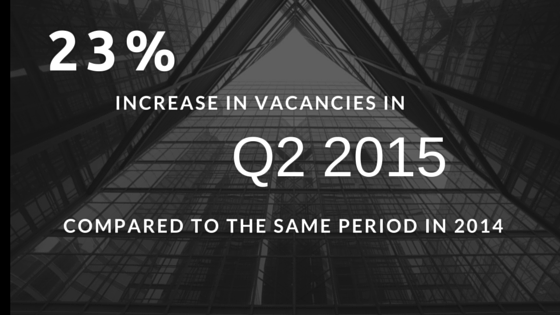 We have also seen a 40% increase in the number of permanent vacancies coming to the market in the same period; again while this is a very positive indicator, it does reflect the relatively low volume of such vacancies in the second Quarter of 2014.

And as with the trend over the past 18 months, there is a noticeable clustering of vacancies, for Qualified Accountants, between the 43,000 euro – 58,000 euro salary range which indicates that the number of vacancies commanding salaries in excess of 60,000 euros continues to be low.

HR
We have found that the number of vacancies arising in HR during the second Quarter of 2015 is almost identical to the same period in 2014.

While it is a significant improvement on Quarter 1 (where there was a 50% decrease in the number of vacancies) it continues to reflect the trend that we are now sourcing for more senior Manager / Director level positions, within more specialist areas of HR, than would have been the situation previously

Support Staff
As with Quarter 1, we have found that this area has remained constant with no increase/decrease when comparing Quarter 2 in 2015 with the same period in 2014. There continues to be a demand with the number of temporary/short-term vacancies broadly similar between the two years (ie 2015 vs 2014) but the number of permanent positions coming to the market continues to be low.